Scott Schoneville scored two and deservedly won the Man of the Match nomination.

Twenty eight weeks to the day since Glencairn last played a match, the new look squad finally got their chance to take their bow at the newly-named Hamish B. Allan Stadium. Unfortunately due to the Scottish Government restrictions, there were only a handful of committee members present to witness a rout as seven of the new summer signings made their first appearances for the club.

With the guidelines also stating that changing rooms could not be used, the new strips were left in the cupboard for now as the players of both teams were asked to turn up for the match already stripped and ready for action.

There was no hint of unfamiliarity as The Glens raced into a comfortable lead early in the match. It took only five minutes to open the scoring as Jay McKay marked his return from a year-long absence by turning the ball into the net after fine link play by Harry Mitchell and Ciaron Smith. 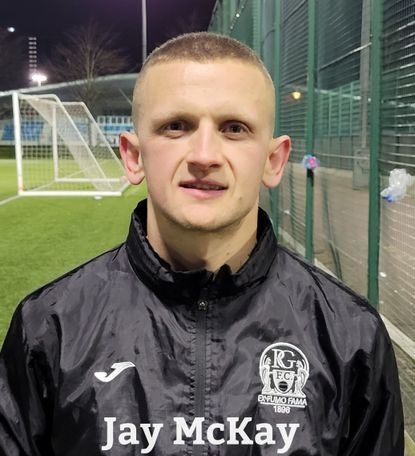 Mitchell fired over the crossbar and Smith was denied by goalkeeper Adam Brown, before the lead was doubled in the 10th minute. Smith released Scott Schoneville on the left and he squared to Michael Lone, who took a touch before beating his marker and firing low into the net.

The hard work of Michael Lone led to another goal in the 13th minute as he closed down defenders to win the ball and then took a return pass from McKay before hitting the net again.

Graeme Goodall's last-ditch tackle denied Mitchell as he was pulling the trigger, and Michael Lone was denied a hat-trick after more powerful play ended with Brown saving at the near post.

Kieran Coleman had been denied by an excellent save by Brown, but he wasn't to be denied a few seconds later as he stabbed home from close range after Brown had blocked Mitchell's header.

Carluke had gone close with a couple of headers earlier in the match, and they got their reward as they pulled a goal back in the 32nd minute. Dillan Duddy's cross from the left was met by the head of Nick Aitchison, and the ball looped up and over the helpless Scott McLellan.

Rikki McIntosh came on at half time to play up front.

After several half time changes on both sides, Rikki McIntosh was denied a goal with his first touch of the ball by an excellent save by substitute goalkeeper Danny Terry. Instead it was Rovers who hit the net again in the 48th minute, Jordan Conlon firing past Garry Whyte from close range.

Having seen their four-goal lead halved, The Glens turned the screw again. Tommy Lone's curling effort was well saved by Terry, but the resulting corner saw Scott Schoneville curl the ball straight into the net off the inside of the far post.

It was 6-2 in the 56th minute with a quite delightful goal. Terry Hewitt fed McIntosh, who laid the ball off to Harry Mitchell, and the playmaker dribbled through the defence and calmly rolled the ball under Terry.

To Carluke's credit they stuck to their game, and they pulled another goal back in the 63rd minute. James Frame's cross with the outside of his foot picked out Jamie Dickson at the back post and he converted from close range.

The Glens still had plenty in the tank, though, and it was 7-3 when Tommy Lone's crossfield pass saw Jay McKay spring the offside trap, and he cut inside his marker before beating Terry at his near post.

Things got worse for the visitors as Schoneville's brilliant corner delivery caused problems again, and a defender headed past Terry for an own goal. The visitors couldn't wait for the final whistle now, but The Glens weren't finished yet. A cross from the right was only cleared to the edge of the penalty area, where Scott Schoneville took possession, dribbled past three players and smashed the ball into the roof of the net.

Glencairn pressed for double figures, but it wasn't to be. Manager Willie Harvey wasn't entirely happy with the performance, stating his concerns over the three goals conceded, however it was the first game for a new squad and it wasn't a bad way to start overall.

Man of the match - (chosen by Alex Forbes) Scott Schoneville.